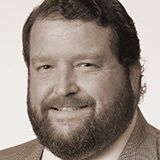 Managing chronic pain presents doctors with major challenges—painkiller side-effects, such as increased tolerance and even addiction, can be hurdles to treatment. The answers to these challenges may lie in the unique drug compounds studied by Chris McCurdy, professor of medicinal chemistry and pharmacology and research associate professor in the UM Research Institute of Pharmaceutical Sciences.

McCurdy is working with compounds that are highly selective for sigma receptors. That means that his compounds have a very specific application in the body, although the exact role of sigma receptors is still unknown. In fact, the role of sigma receptors has been puzzling researchers for almost 40 years, but the discoveries made by McCurdy and his team may lead to better understanding—and with that understanding, a wide range of applications for the compounds. The research is supported by the National Institute on Drug Abuse at the National Institutes of Health.

The role of sigma receptors has been puzzling researchers for almost 40 years, but the discoveries made by McCurdy and his team may lead to better understanding—and with that understanding, a wide range of applications for the compounds.

One novel application is the ability to pinpoint the location of pain. By injecting rats with the compound and using a PET-MRI to scan sciatic nerve injuries, McCurdy’s team zeroed in on the rats’ injuries.

“One of the largest reasons people are on pain medications is because they have chronic pain,” McCurdy said. “That chronic pain many times originates from nerve damage. You may feel like your entire leg is burning or hurting, but nobody can really pinpoint where the damage to the nerve was. The hope is that this agent will be able to pinpoint the exact location of the damage, so it can be treated directly at the site.” 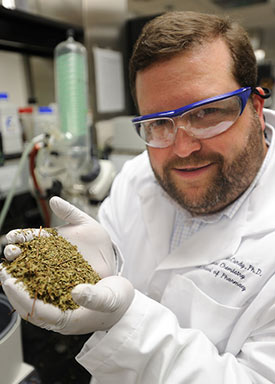 It may be possible to use the compound for similar imagining techniques in Alzheimer’s patients, allowing doctors to diagnose Alzheimer’s in living patients by revealing key information about changes in brain structure.

Other novel applications of sigma-targeting compounds include their potential uses in treating cocaine addition, methamphetamine addiction and depression.

“Sigma is an interesting target because it seems to be involved in a lot of disease states where the body gets out of balance,” McCurdy said. “I think that’s why we see it in play when there are drugs of abuse like cocaine and methamphetamines; the body is being stressed, and the system seems to get more engaged, so if we block that system, we block the effects.”

Evidence also suggests that sigma receptor compounds can be used as antidepressants, making them all the more effective for treating cocaine or methamphetamine addiction, because withdrawal from these drugs often leads to depression.

“If you have an agent that blocks people from taking those drugs as well as acting as an antidepressant, you may be able to stabilize them,” McCurdy said. “We’ve been very fortunate to have probably the most selective compounds in the world for sigma receptors. Now that we’ve created these tools that are very selective, we can begin working with many different groups in many different areas to see whether they are truly involved in Alzheimer’s, addiction and pain.”