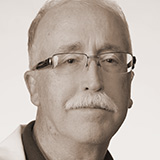 For students working under UM biology professor Glenn Parsons, firsthand exposure to a critical decline in one important fish population has found them knee-deep in a net’s haul aboard shrimping boats in the Gulf of Mexico.

“That means a lot of backbreaking work—picking shrimp out, picking snapper out, hauling the baskets and weighing them,” Parsons said. “Of course, I’m doing it alongside them. I’ve always enjoyed the field work more than anything else.”

The project Parsons and his research team have been pursuing over the past decade could mean a cleaner catch for those shrimpers who have accommodated his work over the years. Even more importantly, though, it could help restore the population of red snapper in the Gulf of Mexico, which has been threatened by a high rate of bycatch by shrimpers.

“Literally millions of tons of dead and dying fishes go back into the ocean worldwide every year. It’s a major environmental problem.”—Glenn Parsons

“When shrimp trawlers drag their big nets through the water, they catch a lot of other fish, too—90 percent of which die as a result of being captured,” Parsons said.

“Literally millions of tons of dead and dying fishes go back into the ocean worldwide every year. It’s a major environmental problem.” 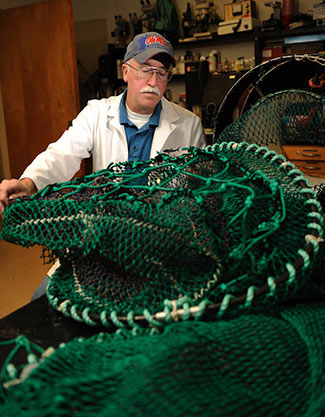 A device developed by Parsons has been shown to reduce shrimpers’ rate of bycatch by about 30 percent among all fish and as much as 50 percent among red snapper.

Such a device stands to make a big difference in the red snapper population, a popular target for both commercial and sporting fishermen that has come under catch-limit protection in recent years. According to some estimates, 25 million or more small, juvenile snapper are caught and die in the Gulf each year when they get caught in shrimper’s nets.

Keeping snapper out while keeping shrimp in isn’t easy. Sorting by size doesn’t work, since the juvenile fish are about the same size as the shrimp. But Parsons’ design has shown such promising results as to earn him an international award from the World Wildlife Fund in 2007.

Dubbed the Nested Cylinder, it attaches to trawling nets and provides an escape route for fish by making use of the red snapper’s instincts to swim toward slow-flow areas.

“It creates a spot of slack water, and when the fish sense that ahead of them, they will turn and face up-current before they get all the way into the trawling bag,” Parsons said. “Since all the fish want to be in that spot, it keeps them moving forward and crowds the fish out of the net.”

It was a basic-biology study of how red snapper behave in moving water that led Parsons to work on a solution to the bycatch problem. He was approached initially by the National Marine Fisheries Service to study snapper behavior in his laboratory.

“Once we gathered data regarding red snapper responses to environmental variables, we decided we could incorporate this information into some kind of new device,” he said.

Over the years, the project has received additional funding from the Walton Foundation for Marine Research and WWF, as well as from the National Oceanic and Atmospheric Administration.

When it came to testing the device, Parsons sought help from Gulf Coast shrimpers, hiring out their vessels to troll for shrimp both with and without the bycatch reduction device.

“If they recognize we’re trying to do something for red snapper as a resource, they’re more than happy to help out if they can,” he said. “I try to be humble as I approach them, because I know I’m stepping into their world.”

The results of Parsons’ field trials in the Gulf have been so positive, he is confident in submitting the device for a federal certification process it must now undergo before making its commercial debut.

“It will be good for fishermen, good for the environment—good for everyone involved,” Parsons said.

“The fishermen will spend less time sorting and more time with their nets in the water. The catch will be cleaner, they’ll use less fuel, and hopefully they’ll have a better seafood product.”